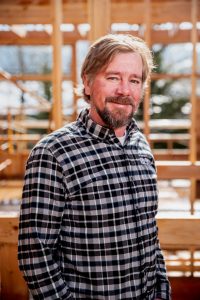 Andy hails from the Great Lakes state of Michigan where he grew up running through the woods, fishing the lakes and streams, and eventually earning a college degree from Central Michigan University (Fire up Chips!). But, the mountains were calling and he had to answer. He moved to the area in 2006 and has held a variety of positions working in the Recreation, Retail, Operations, Non-Profit and Environmental, Health, Safety and Sustainability realms. When not at the ReStore Andy spends his time on the many rivers and streams in the area, skiing and exploring in the mountains, spending quality time with his wife (Abby) and dog (Wilbur) and occasionally curled up by the fire with a good book. His favorite part of working for Habitat for Humanity is the satisfaction he gets knowing that his efforts are going to help support affordable housing in the community.