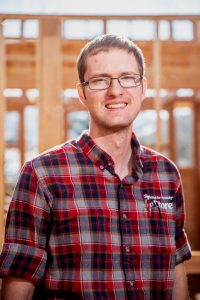 Nate was born in Utah, but thankfully was raised most of his life in the Wyoming Rockies. Hailing from Star Valley Nate spent most of his life among the quite rural community. Leaving a few times only to return to the beauty of the mountains, fields, and forests those in this part of Wyoming many call home. Nate began working at the ReStore a few years ago after having the opportunity to leave his bottom dollar job for a job with new opportunities and cause behind it.  When not at Habitat for Humanity Nate spends his time watching mostly cartoons and anime, playing on his computer, and spending time outside. His hobbies include painting Dungeons and Dragons miniatures, learning history, target practice, and camping. What Nate enjoys most about being part of Habitat for Humanity is that he is working for a cause he believes in, and actually being to actually see it in happen in person.