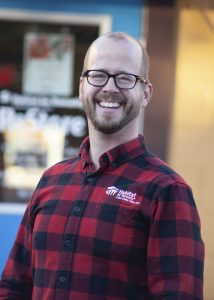 Nick joined Habitat in the summer of 2019. He interacts with volunteers and assists in the office. Nick has lived in Jackson for over a decade and is familiar with the challenges and possibilities of affordable housing in Jackson. His experience as a filmmaker, photographer and public speaker helps us communicate with the community. He spends his free time hiking, mountain biking, cross country skiing and boot packing up Snow King. Nick is also a founding member of the Laff Staff improv comedy troupe that has been performing in town since 2009.